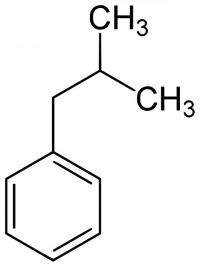 What is Iso Butyl Benzene used for?

What is Isobutyl benzene?

Isobutyl Benzene is an organic, aromatic, neutral and colourless liquid that has a specific gravity of around 0.852. It is also known as 2-methyl-1-phenylpropene. Isobutyl benzene or IBB is a colourless chemical compound with a molecular formula C10H14. It is manufactured out of toluene, propylene, methanol, potassium carbonate, sodium among other chemicals. It is a basic organic raw material used widely in the pharmaceutical and perfume industry.

It is a colourless, flammable liquid that is a respiratory irritant. It is used as an international standard in the study of increased pigmentation and floral scents levels in Pap1-transgenic petunia. It is used as a speciality solvent. It can also be used as a solid acid catalyst for the acylation of aromatic substances. Isobutylbenzene is widely used in the synthesis of intermediates like Ortho-Butyl Aniline and Para-Butyl Aniline.

The major commercial use of Isobutylbenzene 538-93-2 after the manufacturing of ibuprofen is in the perfume industry. It has a sweet odour that is fruity, cherry sweet with a balsamic nuance which makes it a basic raw material used in the perfumery industry.

Solubility: Soluble in ether, alcohol, benzene and ethanol. It is insoluble in water.

Vinati Organics is one of the leading isobutyl benzene manufacturers supplying and exporting premium quality isopropyl benzene 538-93-2. With a record purity of 99.8% vis-à-vis the prevailing international standard of 99.5%, we supply organic, aromatic, neutral and colourless IBB that is used as an intermediate in pharmaceutical and perfumery chemicals.