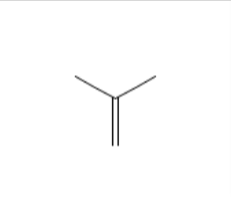 Isobutene is a hydrocarbon with the chemical formula CH32C=2C=CH2. It is a four-carbon branched alkene and is one of the four isomers of butylene. It is a colorless gas with a faint petrol-like odor. It is mostly shipped as a liquid gas under its own vapor. This chemical needs to be handled carefully during transportation as it is flammable and any contact with the liquid can lead to frostbite. Because its vapors are much heavier than air, a flame can easily flashback to the source of a leak which can be either liquid or vapor. In addition, it can also asphyxiate by the displacement of air. Prolonged exposure to chemical 115-11-7 to fire or heat can lead to rupture of the container. This chemical is used to manufacture isooctane which is a high octane aviation fuel.

The uses of this chemical are for manufacturing isooctane, high-octane aviation fuel, butyl rubber, polyisobutene, resins, tert-butyl chloride, tert butanol methacrylates, copolymer resins with butadiene, acrylonitrile, methyl-tert-butyl ether. Other uses include use as a monomer or for manufacturing copolymer for use in the production of synthetic rubber and plastics. In addition, the chemical is also used in lubricating oil additives, hot melt adhesives, sealing tapes, special sealants, cable insulation, polymer modifier, viscosity index improvers, films, and coatings.

Can Isobutylene Be Manufactured Through Fermentation?

Isobutene is a chemical for which bio-production may replace petrochemical production in the near future. It is possible to achieve bio-based production through chemocatalyric or thermochemical methods, we will be looking at how this chemical can be obtained from fermenting sugars. The formation of isobutylene from biological processes has been well known since the 1970’’s but extensive metabolic engineering is needed to produce economically viable yields and productivities. Two metabolic engineering developments can be used for anaerobic production close to the theoretical stoichiometry of 1isobutebne+2CO(2)+ 2H(2) O per mol of glucose.

One method relies on the conversion of 3-hydroxyisovalerate to isobutene as a side effect of mevalonate diphosphate decarboxylase. The other method on isobutanol dehydration as a side effect of engineered oleate hydratase. The second method resembles the fermentative production process of isobutanol followed by isobutanol recovery and chemo catalytic dehydration. The advantage of this method is that gaseous 115-11-7 is obtained from the fermentation process instead of isobutanol. The low aqueous solubility of isobutene minimizes product toxicity to the micro-organisms.

Developments regarding obtaining isobutene by fermentation are still in their infancy, large scale production of the chemical through fermentation is assessed. It is estimated that 70% of all production costs will be due to the price of lignocellulosic hydrolysate which is the preferred feedstock.

Vinati Organics has the distinction of being the largest manufacturer of IBB and ATBS in the world. We blend innovation with chemistry to deliver value-added products to our esteemed customers. We are a leading manufacturer of specialty chemical and organic intermediaries and have a sustained market presence in over 35 countries in the world. Ever since our inception in 1989, we have evolved from a single product manufacturer to an integrated business that offers a wide range of products to some of the largest industrial and chemical companies across the US, Europe, and Asia.

Our R&D capabilities and expertise in producing superior quality and cost-effective chemicals have always kept us ahead of the industry curve.